After 65 years, Teatr Nowy and the Jewish Theatre are cooperating again 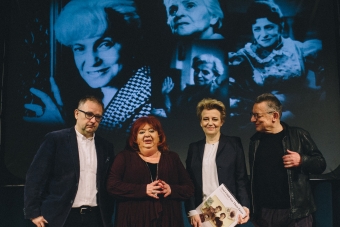 The inauguration will take place on 27 March, on the International Theatre Day. Teatr Nowy will present a premiere of the monodrama “Ida Kamińska” performed by Joanna Szczepkowska and based on Henryk Grynberg's book “My Theatre.”

The initiative was announced by the Mayor of Łódź, Hanna Zdanowska, and Gołda Tencer, who is originally from Łódź and who spent her childhood and teenage years in the city, on the stage at 15 Więckowskiego St. “We are returning to the roots of multicultural Łódź. The Jewish Theatre is coming back to the very place where it was opened after the war and operated for several years since 1947, sharing the stage with Teatr Nowy; whereas Ida Kamińska has been essential for Polish and Łódź’s culture. This new opening and cooperation with the Jewish Theatre is something natural because it is part of Łódź’s genotype,” said the Mayor of Łódź, Hanna Zdanowska, welcoming Gołda Tencer who on the other hand has remembered the time she spent in our city.